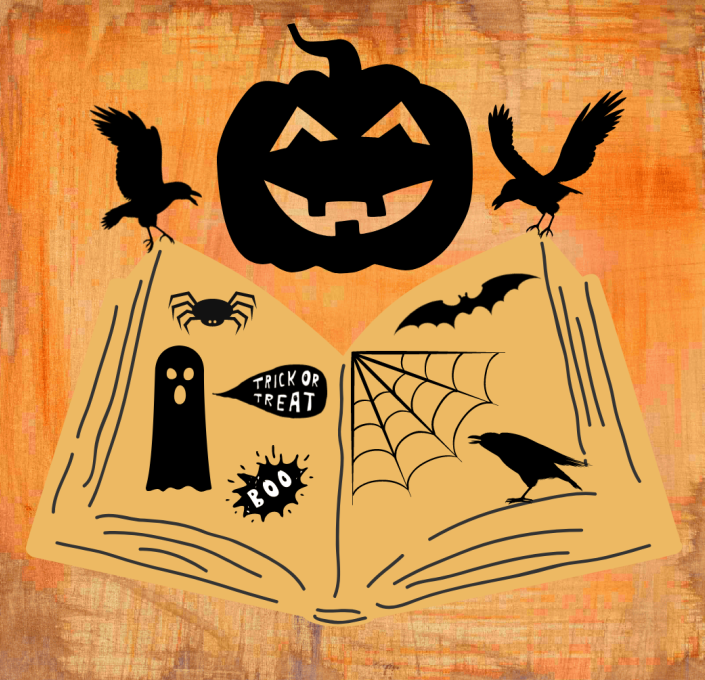 Founder and Co-Editor Nadya Miryanova explores the history and etymology behind Halloween, while delving into some of its earliest literary references

Pumpkin carving, trick-or-treating, and dressing up as a cat/bat/anything remotely spooky from your wardrobe all form integral parts of contemporary Halloween. Coffee shops sell out of their pumpkin spice lattes, Tesco presents an impressive collection of plastic witches’ hats, and Ghostbusters receives a record number of calls. The night of 31st October is certainly a date for the diary.

But where did these ideas originate? For how long have we been wearing frightening masks (not the surgical ones, mind you) and carving funny faces out of a winter squash for this October festival? The date stems back further than you might think…

Early origins of Halloween – The Iron Age and Samhain festival

The early origins of Halloween can be traced back to the Celtic festival, Samhain – literally meaning “the end of summer” in modern Irish – which was celebrated over 2000 years ago on 1st November. The day marked the end of the harvest season and the beginning of a harsh winter, a mystical time between years when the ghosts of the dead were thought to walk the earth. The Boyhood Deeds of Fionn, a medieval Irish narrative, states that the sídhe (portals to the Otherworld) “were always open at Samhain”. It was widely believed that otherworldly spirits would be entertained by the living or else would find a body to possess. A number of festive activities were thus held to mark the occasion, including building sacred bonfires, sacrificing animals/crops to Celtic deities, and leaving gifts on doorsteps to help the spirits of loved ones find a safe passage back to the spirit world. During these celebrations, the Celts would wear costumes and masks, which were thought to prevent spiritual possession. The spirits’ ephemeral presence was also believed to help Celtic priests make accurate prophecies of what the future might hold.

By 43 AD, the Roman Empire had conquered the majority of Celtic Britain, leading two Roman festivals to be combined with the Celtic celebration of Samhain. The first was the Feralia, a winter festival commemorating the Manes (Roman ghosts of the dead). Marcus Terentius Varro, scholar and prolific author writing in the 2nd century BC, described the celebration in his linguistic treatise On the Latin Language: “The Feralia (festival of the dead), from inferi (the dead below) and ferre (to bear), [is thus named] because at the time, they ferunt (carry) feasts to the tombs of those to whom it is a duty to offer ancestor-worship there”. The second was a day to honour Pomona, Roman goddess of fruit trees, gardens, and orchards. Her symbol was the apple, which provides one explanation for the tradition of bobbing apples/eating toffee apples on Halloween today.

Did you know? The suspicion of black cats stems from the Middle Ages, when many people believed that the animals were either the familiars of witches or the witches themselves, hiding in disguise.

During the early Middle Ages, many Celtic locals had converted to Christianity. Although the Roman Catholic Church frowned upon the pagan rituals associated with celebratory festivals, it incorporated slightly modified versions of their traditions to attract and appease converts. In the early 7th century AD, Pope Boniface IV dedicated the Roman Pantheon in honour of all Christian martyrs, and the Catholic feast of All Martyrs Day became celebrated in the Western Church. Pope Gregory III then expanded this festival to include all saints, and moved it from 13th May to 1st November. Fast forward to the 9th century AD, and the Vatican merged the Samhain festival with a church sanctioned holiday, termed “Alholwmesse” in Middle English and now commonly known as ‘All Saints Day’ on 1st November, a day dedicated to honouring martyrs and the faithful deceased. The night before thus became known as “All Hallows Evening”, which evolved into the secular celebration of “Halloween” (a contraction of the former phrase).

While Halloween originated and was popularised in Celtic lands, its reception was mixed in former British colonies. The Puritans colonising America were anti-Catholic, which meant that any celebrations relating to Halloween were strictly forbidden. However, certain secular elements of Halloween were still incorporated into harvest-related events in the early 1800s. Midway through the 19th century, a large section of the Irish population immigrated to America as a result of the potato famine. With them, they brought several Halloween traditions – including bobbing apples, dressing up, and causing mischief. A few decades later, Halloween in America was refashioned as a holiday focused on communal celebration, with widespread parties including games and festive costumes.

“They [the Puritans] felt that Halloween, Christmas, Easter and all those holidays were vestiges of Catholicism. Protestant reformer Martin Luther actually nailed his 95 Theses to the door of the Catholic Church on All Hallows Eve.”  – Michael J. Altman, assistant professor of religious studies at the University of Alabama.

Trick or treat and the commercialisation of Halloween

In 1927, Calgary Herald wrote what is thought to be the first record of the “trick or treat” tradition: “Hallowe’en came and went… The greatest activity was manifested by the very young, who wandered in droves from door to door, heavily disguised and demanding “trick or treat”. To treat was to be untracked.” Originally, “trick or treat” was effectively a form of extortion, whereby people began giving treats to stop young pranksters playing tricks. In the same year, the Alberta Canada Herald (1927) stated: “The youthful tormentors were at back door and front demanding edible plunder by the word “trick or treat” to which the inmates gladly responded and sent the robbers away rejoicing”. By the mid 1900s, “trick or treat” became incorporated as a festive tradition, and the holiday as a whole became directed at a younger audience, thus taking the form we recognise today.

And here we are, back to the present day, where we continue placing pumpkins and sweets outside our houses in the hope of appeasing trick-or-treaters. Whether you’re celebrating this October festival at home or at uni, abroad or with family, I wish you the best of luck for wading off any evil spirits and finding the perfect spooky costume. Happy Halloween!