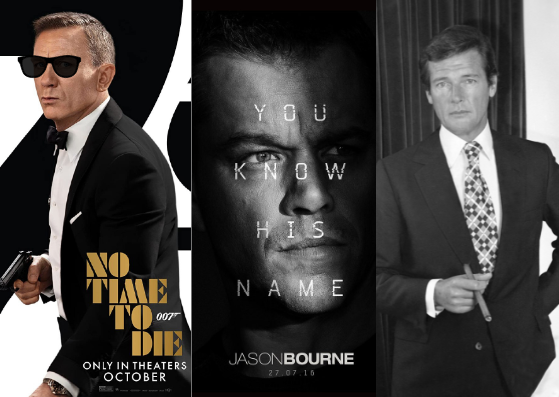 In honour of the release of the latest Bond film this month, No Time to Die, and following our festive theme for Halloween, I have decided to rank some famous screen spies on how spooky – and I use the term pretty loosely – their characters are. We’ll start with the yawningly un-spooky and end with the shaking-from-one-too-many-espressos spooky. You’ll notice that there will be quite a lot of Bond talk, but this is mostly to fill the aching void in my heart until the next Bond film is out. Besides, what better time to talk about a franchise that’s all about dressing up, making lots of money and indulging in some cocktails than Halloween?

Starring in seven different Bond films from 1973 to 1985, Moore’s Bond is about as scary as a little boy asking for a vanilla ice cream, in my opinion. As a conservative middle-aged man schooled in Buckinghamshire, Moore clearly epitomised the progressive counter-culture spirit of the 1970s. In his own estimation, he was only the fourth best actor to play Bond, and always seemed more likely to have a license to be a mischievous drunk uncle than a license to kill.

From one Bond to the next, the 1990s gave us a modern, progressive Bond, a man that supports environmental conservation and nuclear disarmament — we’ll skip over the bits where he shoots people and objectifies women. Pierce Brosnan was the ultimate Blairite Bond, he was modern and suave, but still willing to blow things up and wave the Union Jack. The ‘Third Way’ Bond, while mildly scarier than Roger Moore’s, was still pretty vanilla. How scary can a man who supports Greenpeace be?

Now we’re getting into slightly scarier territory. Jason Bourne, played by Matt Damon, is a young maths prodigy who is taken off the streets of Boston and trained to become a CIA super-assassin… or maybe I’m confusing two different films? Anyway, Bourne wakes up one day with amnesia and can no longer remember how to do long division, and he’s also being hunted by the CIA. Bourne is an altogether different spy from Moore and Brosnan’s Bonds and is less about cheesy one-liners and more about the actually taking out bad guys stuff. Americans are much more efficient.

Now we come to the OG, the spy who made all spies. With a lumbering Scottish physique and a bulletproof layer of chest hair, Connery’s Bond is certainly scarier than several of his successors. Originally described by Bond author Ian Fleming as an “overgrown stunt-man”, Connery’s Bond had the wild physicality of a highland lumberjack but the manners and dress of an upper-class Edinburgian. He was scary, but with a smooth Scottish lisp that would comfort you on a stormy day.

Jack Ryan, played most recently by Chris Pine, is a CIA analyst with a PhD in economics who finds himself becoming a field agent tasked with fighting whoever America is trying to take out next. There are few things scarier than a man who can kill his enemies while also giving them a light macroeconomics lecture… Unlike Bond, who has to ask for his license to kill from the Americans, Jack Ryan has the full force of the CIA behind him and so can basically do whatever he wants. An economist let loose on society? A terrifying thought!

With steely blue eyes that could melt cement, the latest Bond is grittier and more dangerous than his earlier iterations. There’s nothing scarier than a blonde Bond, blinding his enemies with his shiny yellow locks. If Roger Moore is the elder statesman, Pierce Brosnan is the smooth operator and Sean Connery is the suave Scotsman then Craig’s Bond is the action-man, downing redbull before endlessly chasing baddies across rooftops and through tube stations. The man fights evil villains without Connery’s protective chest hair, Brosnan’s dreamy looks or Moore’s ‘70s one-liners, and he still manages to come out on top.