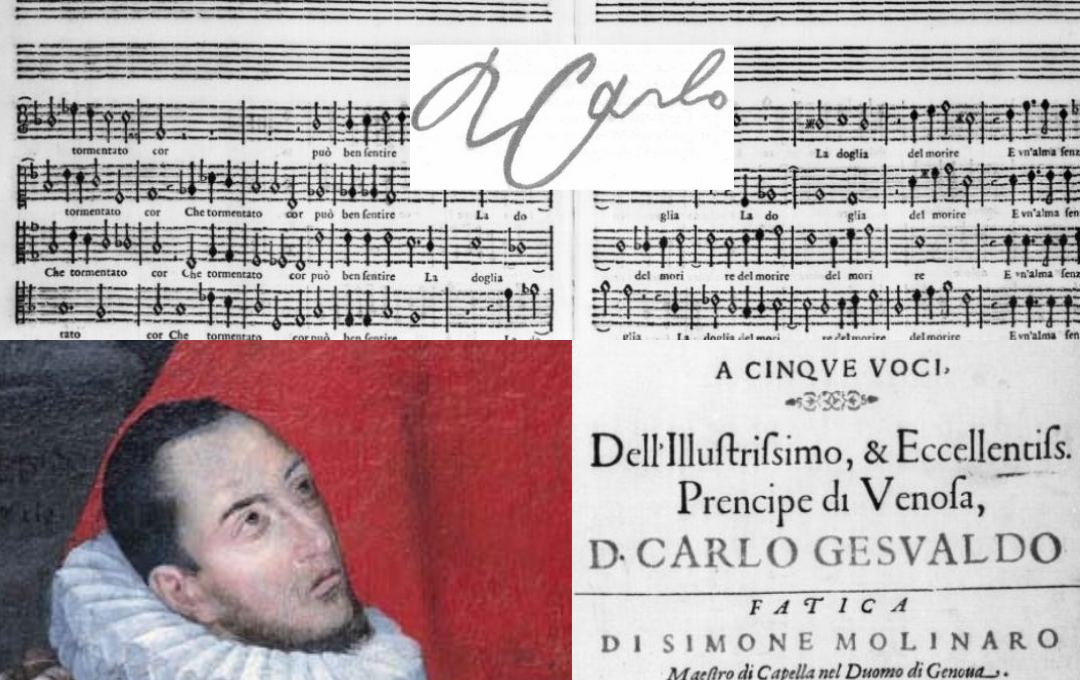 When I was about 16, my piano teacher asked me to listen to a book of madrigals (secular vocal compositions) by the Italian Renaissance composer Carlo Gesualdo. I may not have been quite as motivated to follow up on his suggestion had he not first relayed to me the lore of Gesualdo, the Italian prince, harmonic pioneer, and wife-murderer. In 1590, at the age of twenty-four, Gesualdo stormed into the bedroom of a palace apartment in Naples where he caught his wife in the throes of passion with her lover, the Duke of Andria. In a fit of premeditated rage, he shot the Duke and stabbed him repeatedly, then turned to his wife, Donna Maria D’Avalos, and cut her throat. According to eyewitness interviews included in the reports of Neapolitan officials, Gesualdo “reëmerged, his hands dripping with blood. Then he went back into the room, saying, “I do not believe they are dead!” And he did more violence” (“Prince of Darkness”).

Gesualdo has been a frequent object of fascination and inspiration among classical composers and enthusiasts of the morbid—countless operas, chamber pieces, songs, and films have been dedicated to his mythos. But at least as interesting as the bloody, Shakespearean scene of 1590 (which did not much affect his professional life, other than prompting him to relocate for a time) is the actual music he produced, the majority of which was written in the shadow of the double-murder. After 1590, Gesualdo became musically obsessive, dedicating his life to composition. In a letter written by fellow Italian nobleman and composer Emilio de’ Cavalieri, dated December 19, 1593, Cavalieri bemoans the musical fixations of his comrade: “The Prince of Venosa [Gesualdo], who would like to do nothing but sing and play music, today forced me to visit with him and kept me for seven hours. After this, I believe I shall hear no music for two months” (“Carlo Gesualdo and a Musical Correspondence of 1594,” 411). From 1595 onwards, Gesualdo lived in isolation in a castle, hiring groups of virtuoso musicians to perform his music until his death in 1613.

The music of Gesualdo is chilling. It is richly evocative, very complex music; unlike the later Baroque music of Bach, it does not emphasize the individual musical line or capitalize on the musical inertia of interaction between vocal lines. There is a kind of implicit confusion in the way its polyphony (use of simultaneous voices, with equal emphasis on each) drifts along, rather like five builders of Babel trying and failing to communicate with one another. Some of the sounds Gesualdo creates are familiar—open, round, warm, consonant, creating the kind of harmonic aesthetic commonly associated with an angelic choir. However, Gesualdo often uses these familiar sounds as gateways into the uncanny. Listening carefully to his music reveals shocking twists, harmonic movement that sounds like it would be more at home in the middle of the 20th century than at the dawn of the 17th. In certain ways, Gesualdo heralds the musical formulas and experimentations of Schoenberg and Coltrane, three centuries before their time.

The disorienting experience of listening to the music of Gesualdo tells us something about how we use music to orient ourselves. Music is often used as a tool for comfort. Through music, we can find the reliable hospitality of nostalgia, the warmth of sated expectations, the safely guided passage from tension to resolution. Often nothing is at stake when we listen to music, and often nothing needs or ought to be. The music of Carlo Gesualdo offers a reminder of what music can look like when the stakes are higher, when a récit of anguish and melancholic rumination is infused into a vocal ensemble. Gesualdo’s music is not the only music one can turn to for an experience out of tune with the ordinary, especially as we approach the 20th and 21st centuries—the organ works of Olivier Messaien, the timbral experimentations of Toru Takemitsu inflected by Japanese folk music, the unsettling shrieks of Eric Dolphy and Ornette Coleman like transfigured battle cries for revolution, the cosmic meditations of Alice Coltrane, the horrific sonic thickets of Krzysztof Penderecki’s orchestral works; these all offer their own flavor of conversion experiences into loosened (or rejected) tonality.

Tonality is a system, like capitalism, racial factionalism, and patriarchy, whose strength lies in its ability to naturalize itself. We find it difficult, or even impossible, to imagine that these elements of our culture could be arranged any differently from how we have grown accustomed to them. Growing up in the West, we are socialized in a landscape of tonal hierarchies, and we learn to read musical cues in life in much the same way we learn to interpret and use language. A discordant tone cluster is used in the score of a horror film to heighten the cinematic tension; a playful pizzicato motif is used in a children’s show to insist on the innocence and whimsicality of the show’s content. When music is used by a cultural authority to guide our emotions in a particular direction, ideology is never far away.

A less subtle example of the same phenomenon is the employment of a laugh track in a sitcom to let the audience know when they are “supposed” to laugh, or cheer, or boo. This kind of authorial guidance betrays a lack of trust in the audience’s judgement, or else a lack of faith in the effectiveness of its own material to provoke the right reactions at the right times (hence also the prompting of an “Applause” sign for a studio audience). It reminds us that “author,” “authority,” and “authenticity” all spring from the same root. We come to rely, in many situations, on the authoritative word of the curators of our culture (more likely the producers and marketers of content than the creators themselves) for the reassurance that our reactions to their products (and so also our interpretations) are “right.” And in ceding this creative ground, we, to however insignificant a degree, alienate ourselves from the essentially personal experience of art. Listening to music like Gesualdo’s, even just every once in a while, helps to keep our musical senses sharp, and to give our ears enough navigational independence to detect when we are being led somewhere, and to decide whether or not we actually want to go there.

“When music is used by a cultural authority to guide our emotions in a particular direction, ideology is never far away”

Possibly the most beautiful and consistently revelatory quality of Gesualdo’s music is its tendency to resolve itself in a completely unexpected, even unexpectable way. For me, listening to these moments in his music has the effect of finding myself lost in an unfamiliar place, a place that is equal parts terrifying and exhilarating, only to find myself arriving in an uncannily familiar place, a place I did not even recognize as a home until I arrived there. (Freud’s famous idea of the “uncanny,” or unheimlich, is more faithfully translated as “unhomely.”) Very nearly every piece written by Gesualdo, as far as I can tell, ends with a very traditional harmonic resolution, no matter how far off-track the harmony of the piece strayed on its way there. What we might stand to learn from his music, then, is that the further we find ourselves from the familiar, the more alien the landscape we end up in on our travels, the more able we will be to appreciate, and to continually question, the place we finally call home.